Moments. This life, our day to day existence, boils down to a collection of moments. Our moments define us. Small moments, monumental moments, long or short moments, wasted moments, forgettable moments, fleeting moments. All of our moments, pieces of a puzzle, assembled to become the image of our life. No one moment more important than its successor or predecessor, for without every piece, our puzzle shall never be complete. We hope for a greater abundance of moments and dream of longer moments. We wish our moments aways and drive them to speed past. As tragedy floods our lives, moments slow. We shiver as they breeze by with the wind in blissful times. Moment by moment, the pieces of our puzzle find their place. Every unconscious breath we take counts a moment that illustrates our life.

Every unconscious breath we take counts a moment that illustrates our life. Often, what we fail to recognize is that each and every one of us has only one puzzle. We throw pennies in a well, wishing for the pieces to another’s puzzle, not considering how they will never fit into our own. Our fate is destined in the moments we have been blessed with, it is a shame not to cherish each piece. As we wish to alter our moments we tend to forget they are not infinite. Once the last piece of our puzzle has been placed, our collection of moments becomes an image of our life.

We must hold sacred each moment we are given, for others are robbed of their pieces each day; never able to complete their puzzle. We must fill each moment with optimism and love, so that in the end, when all of our pieces fit, our puzzle is a work of subtlety flawed beauty to be admired for eternity.

Distance running is obsessive. To engage in a sport that often means spending 40 minutes to 2 hours in blazing heat, freezing cold, or howling wind alone,  you’ve gotta be a little obsessed (with a side of crazy). The obsessive nature distance runners have with their sport is both a blessing and a curse.

Obsession with running is a blessing when it’s 9 am on a Saturday, but you’ve already done more physical activity than most Americans will do all week (probably an actual stat). Or when you’ve had a stressful day at work and those miles you force yourself to get out and run clear your head and refresh your mood. But the obsession can quickly turn from productive to problematic.

Despite training through 8 years of competitive cross-country and track, countless 5ks, numerous half-marathons, and four fulls, I still have not mastered the art of listening to my body but some of our most important training days are the ones that we truly take easy. It can be a struggle when training for a big race not to run every run to your fullest potential, but it’s necessary.

I am notorious for getting down on myself any and every time a run does not go as well as planned. Today I did not let that happen. Today, I had one of those “feel like crap for no apparent reason (but probably 6-7 little reasons)” kinda of days. Often on these days I get frustrated and rather than take it easy, push my run harder and faster than I would have had I felt good off the bat. This is counter-productive. I will literally take the sign my body is giving me to slow down, cut it short, or rest and give it a big FU by doing exactly the opposite of what I need. (This is probably why I went into the Boston Marathon with a torn hamstring.) BUT, today was different.

Today, my body gave me a sign and I listened. A year ago I would not have and a year ago I sustained an injury that took me out for 3 months. As runners, we need to look at the big picture. We need to look ahead to the goal that we are working towards, whether it’s a PR, a new distance, a running streak, or another goal. If you are struggling to get past a less than stellar run, put it in perspective. This afternoon I cut my run short by a mile, will that affect my time at the Boston Marathon in May? Probably not. Will if impact my ability to run Chicago in October? Maybe. Not running that mile probably did more to prevent injury and illness than running that mile would have done to improve fitness.

When you have bad running days (and you will) do not take them to heart. You don’t let every great run make you think you’re unstoppable, so don’t let every underwhelming run make you think you’re incapable. Look at the big picture, remember the goal, and take it all in perspective. Ask yourself: will running this run 10 seconds per mile slower or two miles shorter decrease my chances of reaching my goal? If the answer is no, take off your shoes, put down you watch, and be done. Tomorrow is a new day and there are always more miles to run. 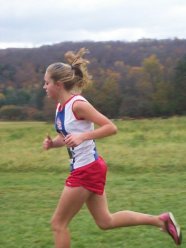 Distance running isn’t a dangerous sport by nature. Although I do not think I could name a single runner (including myself) that hasn’t suffered an injury, minor or serious, it doesn’t conjure up the same “being carried off the field on a stretcher with a broken (insert body part here) or concussion” image as say–football. Despite the ingrown toenails, iron deficiencies, stress fractures, and sprained ankles that plague so many of us,  I’d be willing to bet any mother would take distance running for their offspring over football or alpine skiing any day.

In contrast to the mental image of a happy-go-lucky runner crossing the finish line grinning ear to ear, there is a hidden danger in distance running. It is rarely talked about and as a result, rarely treated. This quiet danger of distance running is disordered eating.

In that happy-go-lucky runner image you have in your head, you’re probably picturing a rail-thin man or woman with defined quads and unstoppable abs. I do too. This is the norm. The problem is, for many runners (females especially) there is a misconception that in order to the best runner you can be you must be the thinnest runner you can be. That is bullshit.

Let’s take a step back for a second and talk about eating disorders. Eating disorders (ED) are a serious mental illness that disturbs a person’s eating patterns and encompasses anorexia, bulimia, binge-eating disorder, and eating disorders not otherwise specified. The National Eating Disorder Association estimates at least  30 million Americans (20m females, 10m males) will suffer from an eating disorder in their lifetime. It is also important to note that many ED’s are undiagnosed and more often than not, due to any number of reasons ranging from the stigma associated with ED’s to insurance issues, ED’s go untreated. If it doesn’t seem like a big deal yet, I’ve got one more startling fact for you; ED’s have the highest mortality rate of any mental illness. I hope by now you understand how serious and dangerous an illness it is.

When it comes to running, disordered eating is too often common practice. The jury is still out on whether or not athletic status is a risk or protective factor for disordered eating, but research has demonstrated that lean sport athletes (like distance running, gymnastics, ballet, etc.) are at higher risk for ED than non-lean sport athletes or non-athletes. Some studies have demonstrated an eating disorder prevalence rate among athletes as high as 35%!

Many runners truly believe they are skipping this or that meal because they are doing what is best for their body. Running is a mental sport and if eating 1000 calories a day while running 60-mile weeks makes you think you are running faster, you’re probably going to do it. If the girl who wins the NCAA championship in cross-country is underweight, it is easy to internalize a belief that if you were her size, you’d be winning races too.

It is a slippery slope in the competitive world. You may start by cutting out that extra slice of pizza on Saturday post-race or by not eating ice cream in-season to be “healthy”. You may run an extra mile here and there and follow long runs with unscheduled gym sessions because you want truly to get better. You will probably see results too, your times get faster, you teammates notice you look a little fitter, and your coach praises your dedication. Nothing about it seems negative until it’s spiraled out of control too quickly to stop it. Suddenly you become obsessive and unhappy. Nothing seems to go right no matter how much more effort you put forth, your performance declines or you become injured, and if you’re a female you may experience the Female Athlete Triad (energy deficiency, amenorrhea, bone loss).

Far too many runners experience a similar spiral from working hard to be healthy and become the best runner they can be to a having a full-blown eating disorder. Even runners without a disorder by clinical definition often have seriously unhealthy relationships with food or their body. It is important to understand how serious the mental side of an eating disorder is and not allow it to be swept under the rug.

There is no easy solution to this problem, but I believe talking about it is a good place to start. Recently, one division one standout Rachele Schulist did just that, taking to her Instagram to share her story. Her story went viral in an important first step to fuel a conversation so many runners can relate to. I have a similar story that I will share in a later post.

It is also important to talk among teams. Coaches must talk to their athletes and be a source of support when someone is struggling. As runners, we need to talk to each other. And more importantly, we need to talk to each other in a positive way. I can only speak to the interactions of a female team, but girls love to talk crap about themselves to other girls. We put ourselves down constantly. We feed off one another’s crap-talking and before we know it we have all pointed out every detail that we hate about ourselves instead of appreciating the fact that we are intelligent, kind, hardworking beings that probably woke up and ran 12 damn miles 3 hours before the crap-talking session ensued.  I do not know you, but listen to me when I say this: you are not fat. I know how hard it is to believe that some days, but if you are running 5-6 days a week at a high-level, you just can’t be (science) and if you think that, please please please reach out for help.

Help yourself and your teammates. Start a conversation even though it may be uncomfortable at first, you will find solace in the fact that you are not alone. Seek help when you need it. As athletes, it is hard to feel weak and vulnerable, but seeking help is strong and brave. We are beginning to destroy the stigma around eating disorders and other mental illnesses, do not be afraid to aid in that process.

If you have a story, share it. If you’d like to chat about the topic, I’d love to. If you need more information on eating disorders following one of the links below or reach out-I have found my fair share of literature on the topic. And if you are struggling with an eating disorder, please seek help or at the very least confide in someone who may be able to support you.