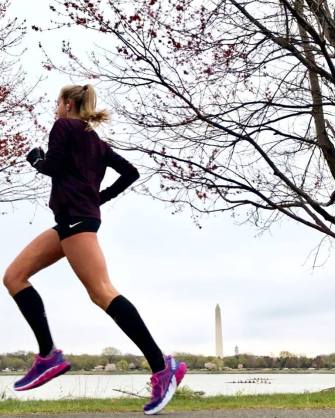 I ran the Boston Marathon for the first time in 2016. It was a fairly hot day but I managed to eke out an 11-second PR. At last year’s race, things didn’t go so smoothly. Having run a PR the year before, I didn’t consider how difficult the course actually is or how much the weather can impact marathon performance. It was a hot day (like really hot) but I didn’t adjust my expectations for the weather and I paid for it hard. By the half, I was done for and the rest of the race was a crawl to the finish. I ran my slowest marathon to date and didn’t earn my ticket back to Boston that day. (Fortunately I found a small race to enter in May, where I was able to run a qualifying time.)

After last year’s race I began working with a coach for the first time since college. I had run some respectable marathon times, but I knew I had not touched my potential and that working with a coach was what I needed. Since then, my training has changed completely and I’ve been a far smarter runner than I ever was before.

I would argue that the build up to this year’s Boston Marathon has been my most successful training cycle ever. With the exception of a small injury that interrupted a couple weeks of training, I’ve run longer long runs, faster workouts, and (slightly) higher mileage. In April, I ran a 3 minute half marathon PR with gas left in the tank. Before the half marathon I ran a workout that consisted of 4×5 minutes at half-marathon effort with 2 minutes easy jog recovery. This Thursday, I ran the same workout but my average mile pace was 15-20 seconds faster than the previous workout, and it felt much easier. 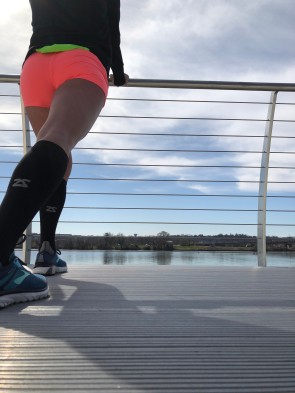 As I cooled down from that workout on Thursday, I thought about how far I’ve come since June when I began working with my coach and how much progress I’ve made in just this one training build-up. My senior year of college, I ran a 5k on the track in 20 minutes and 9 seconds, a pace of 6:29 per mile. During Thursday’s workout I ran 4 miles, in the middle of an 8 mile total workout, at roughly 10 seconds per mile faster than that. The actual pace is arbitrary, but the difference in the pace I ran in college versus the pace I ran this week isn’t. When it hit me that I could run 4 miles faster than I could race a 5k in college I had to hold back some happy tears. Although I had already seen improvement in my times during April’s half marathon, for me this workout was confirmation of just how far I have come.

When it hit me that I could run 4 miles faster than I could race a 5k in college I had to hold back some happy tears.

When I left college, I truly believed I would never run fast again.  I was convinced that everyone peaks in college and if you don’t, you’ve missed your chance. I also didn’t think I could ever wholeheartedly love running again. For years, I’ve been trying to run fast again in order to prove to myself you don’t have to peak in college. But I’ve also been stuck believing that fast race times were the only way I would enjoy running again.

This time around, I’ve found the joy in the process and the journey has been more fun than hard work.

For the first time in 7 or 8 years, I’m heading into a big race and I don’t feel the need to prove anything to myself or to anyone else. This time around, I’ve found the joy in the process and the journey has been more fun than hard work. I have goals in mind and I truly think I’m ready to run a great time, but regardless of the outcome I already feel as though I’ve accomplished so much. I’m healthy and I’m having so much fun running. I’ve proven my speed and fitness to myself in my workouts and I’ve come to really, truly appreciate what my body can do for me. Running a fast time in Boston would simply be the cherry on top. To step on that starting line in Hopkinton happy and healthy is a privilege that I will not take for granted.

Will you be running the Boston Marathon? What are your race or training goals?