Every year, around this point in summer, I begin to feel a little bit of burnout and lack of motivation. It’s been hot for months now, but there doesn’t seem to be any relief in sight and the doubt begins to creep in. Paces that should feel easy are leaving me lying on the floor in a pool of sweat with a popsicle in my mouth. Workouts that sound challenging and fun turnout to be damn near impossible. And long runs? Yikes.

I began my summer training this year coming back from a minor injury I had after the Boston Marathon. Now, this comeback did happen in May, but  in D.C. May is already hot and humid, so that’s when summer training begins in my book. Building my fitness back up during 80 degree runs with 80% humidity was discouraging and for a while I couldn’t seem to figure out what I was doing wrong. I ran a 10K after a few weeks back and although I had zero expectations for myself, I still felt a pang of disappointment when I ran splits close to my marathon pace. Despite knowing what heat does to the human body and how it affects running, I let the idea that I was unfit creep in. I began to think I wasn’t working hard enough and I wouldn’t reach my fall goals. After DNF-ing virtually every hard workout I ran in June, I was letting the Negative Nancy in my head take over.

I tried to keep things in perspective though. I went back and reviewed notes in my training log from last summer before I ran a huge marathon PR in the fall and was reassured by the fact that I was running even slower and felt even worse last year than I did now. I read this article by David Roche again and again and forced myself to stop putting so much weight on the watch. I started doing my workouts on the treadmill to eliminate the heat factor and finally hit the paces I’d been hoping to.

Nearing the end of July, I toed the line to run the Crystal City Twilighter 5k, my first 5k since December of 2016. The race is notoriously hot and I was totally unsure of where my fitness and speed stood, so in the week leading up to the race I backed off my hopes of setting a PR and I set out just to have fun and set a benchmark for my next race. But when the day came and it was rainy (like poured for 12 hours rainy) and cool. The buckets of rain coming down were not exactly the ideal race weather for most people but if I learned anything from Boston 2018, it’s that rain might be my thing. Despite what to me seemed like a poor couple months of training, I ran a 17 second personal best. I was reassured that I’m progressing just fine, but I have still had to word hard to remember that. 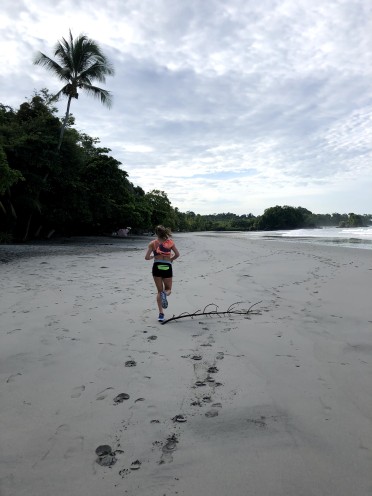 A little over a week ago I was on vacation in Costa Rica. Although I ran pretty regularly and only took one extra, unplanned “rest” day (we hiked so it wasn’t true rest), my running was not the same quality as at home. The weather was similar, but I did the same run each day I was there and it consisted of a steep mile-long down hill, back and fourth miles on the beach, and back up that steep hill. After the first two runs I could barely walk down stairs and by the third, my legs were toast. Regardless, I maintained a pretty solid attitude throughout and focused on enjoying my trip, but when I got home and went back to usual training the negative thoughts swirled around my mind once again. I started the week off with some slow, heavy miles but had an OK run mid-week. I was feeling a little better before I had a long run that left me feeling more beat up than anticipated over the weekend and I worried about my strength. But here we are on a Monday rest day and I’m taking a minute to reflect and remind myself, I’m doing totally fine.

Seriously. I’m doing just fine and so are you. One or two or three runs don’t define your fitness. One or two weeks don’t even define your fitness. The summer is so tricky and if you live somewhere hot and humid, it’s virtually impossible to really know where your fitness is. So for the next month or two, I’m going to keep reminding myself of that and remember that if I’m putting in the work I will be ready when the heat subsides. Summer running is hard and it’s even more mentally challenging than physically at times, but hard, slow, sluggish summer miles are when fall breakthroughs are made.